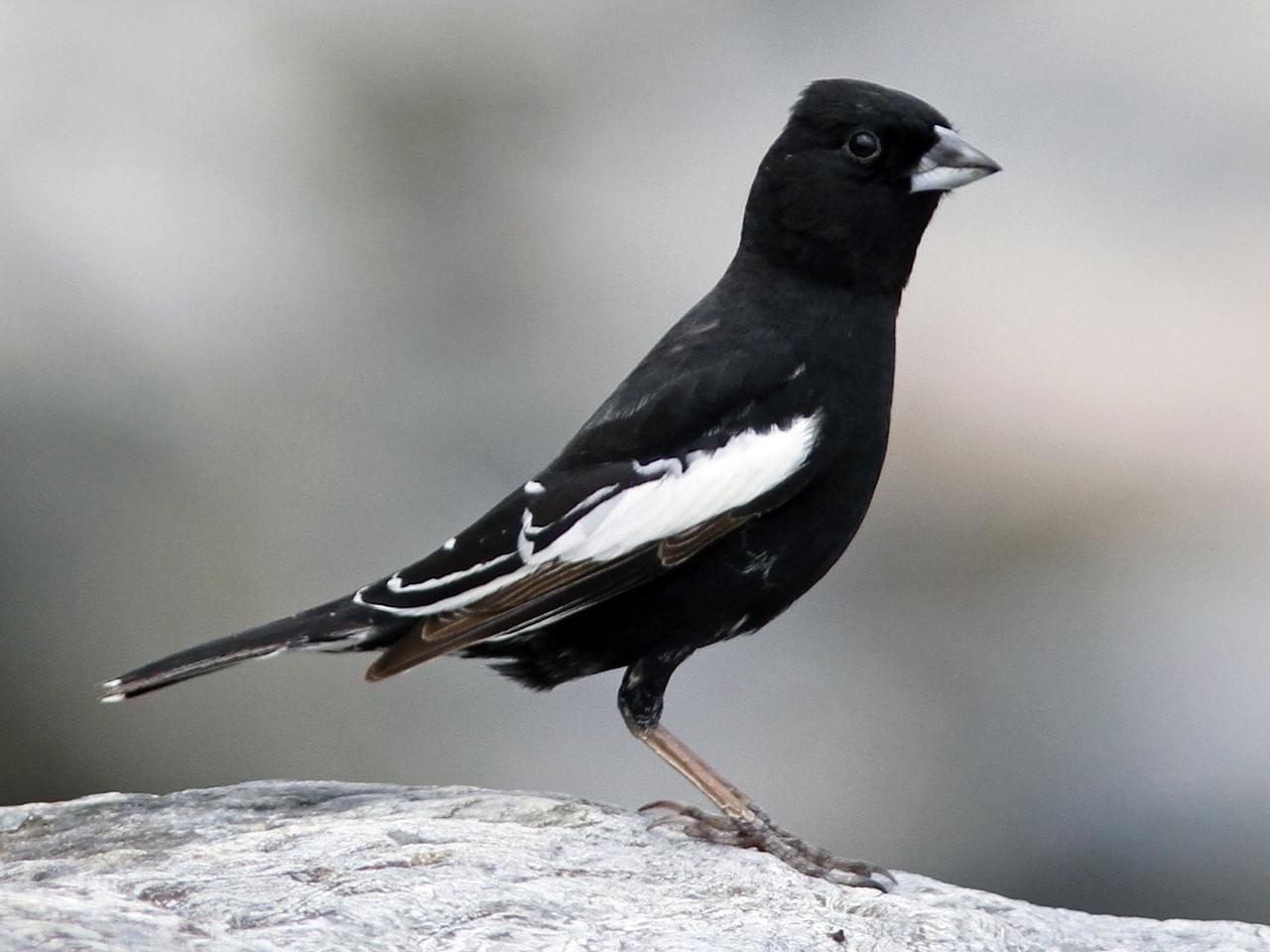 The lark bunting (Calamospiza melanocorys) was designated as the state bird of Colorado in 1931. It was chosen because of its acrobatic courtship dance, melodic song, and being native to Colorado. The lark bunting belongs to the bird group, American sparrow.

As a part of the sparrow family, lark buntings are medium-sized songbirds. They are approximately 5 to 7 inches in length with a wing span of 11 inches. Lark buntings have short, light-colored bills and short tails with white-tipped feathers. Their wings feature a large white patch. Breeding male lark buntings have a dark body with white wings, while females and nonbreeding males have a grayish brown body with stripes.

Lark buntings make their home in the prairie and grassland regions of central and western North America. In summer, they live in meadows and sagebrush-covered areas. Lark buntings build their nests on the ground in grassy areas and under shrubs. The nests resemble an open cup with deep sides. They lay between 2 and 6 pale blue eggs at a time. During the winter months they migrate in flocks to the desert regions of Texas and Arizona as well as northern Mexico.

Lark buntings always feed in flocks except during their nesting season. They mainly forage for food on the ground. During the summer, they eat insects such as grasshoppers, beetles, bees and ants. In the winter, their diet consists of seeds from grasses and weeds.

The male lark bunting is the only sparrow that changes from stark black and white feathers during their breeding season, to a grayish brown with small streaks of black and white in the winter. Lark buntings sing in short whistles and tweets, similar to that of a canary.

This species, of which there are in my possession several specimens, presented to me by my friend Mr. NUTTALL, was discovered by that zealous naturalist and his companion Mr. TOWNSEND on the plains of the Platte, and briefly characterized in the Journal of the Academy of Natural Sciences of Philadelphia. From its general appearance, and especially from what is known of its habits, I consider it closely allied to the Rice Bunting, Dolichonyx oryzivora; I have adopted the appellation given by its discoverers, the latter of whom has favoured me with the following notice respecting it.

“The Prairie Finch inhabits a portion of the Platte country, in large flocks. It is strictly gregarious, and feeds upon the ground, along which it runs like the Grass Finch, Fringilla graminea, to which it is somewhat allied. As the large flocks, consisting of from sixty to a hundred individuals, were started from the ground by our caravan in passing, the piebald appearance of the males and females promiscuously intermingled, presented a curious, but by no means unpleasing, effect. While the flock is engaged in feeding, the males are frequently observed to rise suddenly to a considerable height in the air, and poising themselves over their companions, with their wings in constant and rapid motion, they become nearly stationary. In this situation they pour forth a number of very lively and sweetly modulated notes, and at the expiration of about a minute descend to the ground, and course about as before. I never observed this bird to the west of the Black Hills.”

Mr. NUTTALL’S notice respecting it is as follows:–“On the 24th of May, soon after crossing the north branch of the Platte, we met with this very interesting species of Fringilla. The males associated in flocks with the Cow-birds, uttering a most delightful song. Towards evening in particular, we sometimes saw them in all directions around us on the hilly grounds, rising to a little height, hovering and flapping their wings, at the same time singing something like weet, weet, wt, wt, wt, notes betwixt the hurried warble of the Bob-o-link, and the melody of the Sky Lark. It is in short one of the sweetest songsters of the prairie, is tame and unsuspicious, the whole employment of the little band being an ardent emulation of song.”

Bill short, robust, conical, compressed; upper mandible a little narrower, with the dorsal line very slightly convex, the ridge slightly prolonged on the forehead, the sides convex and bulging, the edges direct, the gap-line nearly straight, deflected at the base, the tip sharp and a little exceeding that of the lower mandible; the angle of the latter short and very broad, the dorsal line ascending and slightly convex, the back broad, the sides rounded, the edges inflected, the tip pointed. Nostrils basal, oval, in a very short deep depression, nearly concealed by the feather’s.

Plumage soft and blended, the feathers ovate and rounded. There are distinct but small bristles at the base of the upper mandible. Wings of moderate length; the outer three quills nearly equal, the second being longest, the fourth slightly shorter than the third; outer secondaries broadly rounded and emarginate; inner tapering to a rounded point, one of them, when the wing is closed, little shorter than the outer primaries. Tail of moderate length, a little rounded, the lateral feathers shorter than the longest by two and a half twelfths.

The bill is light blue, the upper mandible somewhat dusky along the ridge; the feet and claws reddish-brown. The general colour of the plumage is greyish-black, the rump blackish-grey. The quills are blackish-brown, the inner secondaries black. There is a large patch of white on the wing including some of the smaller coverts, the tips of the first row, and the secondary coverts; the primaries and outer secondaries are narrowly, the inner secondaries broadly margined with white, with which most of them are also tipped. The middle tail-feathers are black, the rest brownish-black, all narrowly edged with white, and having a narrow speck of the same at the end of the inner web. Some of the feathers on the abdomen and the lower tail-coverts are also tipped with white.

The female, which is smaller than the male, differs greatly in colour. The bill is dusky above, pale beneath; the feet as in the male. The upper parts are greyish-brown, streaked with dusky brown, the lower white, with oblong spots of brownish-black, the abdomen nearly pure, the sides tinged with reddish-brown. The quills are dark brown, edged and tipped with reddish-white, and the patch on the wing is of the same tint. The tail feathers are also dark brown, the outer externally edged, and all tipped with white on the inner web.

Published with permisson by Marchex, Inc