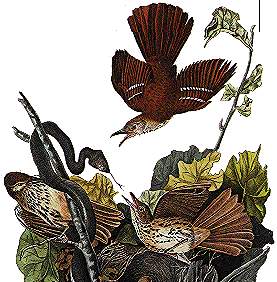 READER, look attentively at the plate before you, and say if such ascene as that which I have attempted to portray, is not calculated to excitethe compassion of any one who is an admirer of woodland melody, or whosympathizes with the courageous spirit which the male bird shews, as hedefends his nest, and exerts all his powers to extricate his beloved matefrom the coils of the vile snake which has already nearly deprived herof life. Another male of the same species, answering the call of despairfrom his "fellow creature," comes swiftly downwards to rescuethe sufferers. With open bill he is already prepared to strike a vengefulblow at the reptile, his bright eye glancing hatred at his foe. See a thirdgrappling with the snake, and with all its might tearing the skin fromits body! Should this alliance of noble spirits prove victorious, willit not remind you that innocence, although beset with difficulties, may,with the aid of friendship, extricate herself with honour?

The birds in the case represented were greatly the sufferers: theirnest was upset, their eggs lost, and the life of the female in imminentdanger. But the snake was finally conquered, and a jubilee held over itscarcass by a crowd of Thrushes and other birds, until the woods resoundedwith their notes of exultation. I was happy in contributing my share tothe general jor, for, on taking the almost expiring bird into my hand fora few minutes, she recovered in some degree, and I restored her to heranxious mate.

The Brown Thrush, or Thrasher, by which names this bird is generallyknown, may be said to be a constant resident in the United States, as immensenumbers are found all the year round in Louisiana, the Floridas, Georgia,and the Carolinas. Indeed some spend the winter in Virginia and Maryland.During spring and summer they are met with in all our Eastern States. Theyalso enter the British provinces, and are sometimes seen in Nova Scotia;but I observed none farther north. It is the most numerous species foundin the Union, excepting the Robin or Migratory Thrush. Those which breedin the Middle and Eastern Districts return to the south about the beginningof October, having been absent fully six months from that genial region,where more than half of the whole number remain at all seasons. They migrateby day, and singly, never congregating, notwithstanding their abundance.They fly low, or skip from one bush to another, their longest flight seldomexceeding the breadth of a field or river. They seem to move rather heavily,on account of the shortness of their wings, the concavity of which usuallyproduces a rustling sound, and they travel very silently.

No sooner has the bird reached its destined abode, than whenever a fairmorning occurs, it mounts the topmost twig of a detached tree, and poursforth its loud, richly varied, and highly melodious song. It scarcely possessesthe faculty of imitation, but is a steady performer; and, although it singsfor hours at a time, seldom, if ever, commits errors while repeating thebeautiful lessons set to it by Nature, all of which it studies for monthsduring spring and summer. Ah! reader, that I could repeat to you its severalcadences, all so full of sweetness and melody, that one might imagine eachlast trill, as it dies on the ear, the careful lullaby of some blessedmother chanting her babe to repose;–that I could imitate its loudest notes,surpassed only by those of that unrivalled vocalist, the Mocking-bird!But, alas! it is impossible for me to convey to you the charms of the fullsong of the Brown Thrush; you must go to its own woods and there listento it. In the southern districts, it now and then enlivens the calm ofautumnal days by its song, but it is generally silent after the breedingseason.

The actions of this species during the period of courtship are verycurious, the male often strutting before the female with his tail trailingon the ground, moving gracefully round her, in the manner of some pigeons,and while perched and singing in her presence, vibrating his body withvehemence. In Louisiana, the Brown Thrush builds its nest as early as thebeginning of March; in the Middle Districts rarely before the middle ofMay; while in Maine, it seldom has it finished before June. It is placedwithout much care in a briar bush, a sumach, or the thickest parts of alow tree, never in the interior of the forest, but most commonly in thebramble patches which are every where to be met with along the fences orthe abandoned old fields. Sometimes it is laid flat on the ground. Althoughthe bird is abundant in the barrens of Kentucky, in which and in similarplaces it seems to delight, it has seldom been known to breed there. Inthe Southern States the nest is frequently found close to the house ofthe planter, along with that of the Mocking-bird. To the eastward, wherethe denseness of the population renders the bird more shy, the nest isplaced with more care. But wherever it is situated, you find it large,composed externally of dry twigs, briars, or other small sticks, imbeddedin and mixed with dried leaves, coarse grass, and other such materials,thickly lined with fibrous roots, horse hair, and sometimes rags and feathers.The eggs are from four to six, of a pale dull buff colour, thickly sprinkledwith dots of brown. Two broods are usually raised in the Southern States,but rarely more than one in the Middle and Northern Districts.

They breed well in aviaries, and are quite tractable in a closer stateof confinement. The young are raised in the same manner, and with the samefood, as those of the Mocking-bird. In cages it sings well, and has muchof the movements of the latter bird, being full of activity, petulant,and occasionally apt to peck in resentment at the hand which happens toapproach it. The young begin their musical studies in autumn, repeatingpassages with as much zeal as ever did Paganini. By the following springtheir full powers of song are developed.

My friend BACHMAN, who has raised many of these birds, has favouredme with the following particulars respecting them:–"Though good-humouredtowards the person who feeds them, they are always savage towards all otherkinds of birds. I placed three sparrows in the cage of a Thrush one evening,and found them killed, as well as nearly stripped of their feathers, thenext morning. So perfectly gentle did this bird become, that when I openedits cage, it would follow me about the yard and the garden. The instantit saw me take a spade or a hoe, it would follow at my heels, and, as Iturned up the earth, would pick up every insect or worm thus exposed toits view. I kept it for three years, and its affection for me at last costit its life. It usually slept on the back of my chair, in my study, andone night the door being accidentally left open, it was killed by a cat.I once knew a few of these birds remain the whole of a mild winter in theState of New York, in a wild state."

The Brown or Ferruginous Thrush is the strongest of the genus in theUnited States, neither the Mocking-bird nor the Robin being able to copewith it. Like the former, it will chase the cat or the dog, and greatlytease the racoon or the fox. It follows the Astur Cooperii and the Goshawk,bidding them defiance, and few snakes come off with success when they attackits nest. It is remarkable also, that, although these birds have frequentand severe conflicts among themselves, yet when the least alarm is givenby an individual, a whole party of them instantly rush forth to assistin chasing off the common enemy. When two nests happen to be placed neareach other, the males are seen to fight furiously, and are joined by thefemales. On such occasions, the males approach each other with much caution,spreading out, and often jerking up, down, or to either side, their longfan-like tail, generally betaking themselves to the ground, and utteringa note of defiance, until one of them, perceiving some advantage affordedby its position or some other circumstance, rushes to the charge. The attackonce fairly made, the fight seldom ends until one has beaten the other,after which the vanquished rarely attempts to retaliate, and peace is madebetween the parties. They are fond of bathing and of dusting themselvesin the sand of the roads. They bathe in small puddles during the heat ofthe sun, and then remove to the sandy paths, where they roll themselves,dry their plumage, and free it of insects. When disturbed on these occasions,they merely run off and hide themselves under the nearest bushes, to returnas soon as the intruder has retired.

During the period of incubation, the male is heard from the top of aneighbouring tree, singing for hours at a time. It ascends to this pinnacleby leaping from branch to branch, and selects several trees for the purpose,none of them more than a hundred yards from the nest. Its song over, itdives towards its favourite thicket, seldom descending by the assistanceof the branches. Both male and female sit on the eggs. Their mutual attachment,and their courage in defending their nest, are well known to children livingin the country. They resent the intrusion even of man, assaulting him,and emitting a strong guttural note resembling tchai, tchai, accompaniedby a plaintive weo, and continued until the enemy retires. Should he carryoff their treasure, he is sure to be followed a great way, perhaps halfa mile, both birds continually crossing his path, and bestowing on himthe reproaches he so richly deserves.

The food of this Thrush, which is also known by the name of French Mocking-bird,consists of insects, worms, berries, and fruits of all sorts. It is fondof figs, and wherever ripe pears are, there also may it be found. In winter,they resort to the berries of the dogwood, the sumach, and holly, and ascendto the tops of the tallest trees in search of grapes. At this season, theyare easily caught in traps, and many are exposed for sale in the southernmarkets, although few of the old birds live long in captivity. Some planterscomplain of their propensity to scratch the ground for the purpose of pickingup the newly planted corn; but I am of opinion that the scratching hasreference exclusively to worms or beetles, their strong legs and feet beingwell adapted for this purpose; and, generally speaking, they are greatfavourites, as they commit few depredations on the crops.

This species, as well as the Robin and some others of this family, suffergreatly during the autumnal moults, and when in cages at this season, becomealmost naked of feathers. The young acquire the full beauty of their plumageduring the first winter.

It is abundant in the Texas, and breeds there. It was not observed byMr. TOWNSEND on the Rocky Mountains, or any where beyond them. Accordingto Dr. RICHARDSON, the vicinity of the Saskatchewan river forms its northernlimits. Dr. T. M. BREWER writes me as follows:–"Your account of thehabits of the Brown Thrash does not leave me any thing to add. I will thereforeonly trouble you with the following test of the ability of this bird todetect the intrusion of eggs not belonging to it. I found this summer,1837, a nest containing three eggs, which I removed, leaving in their placethree Robin’s eggs, and retired to wait the issue. In a few moments thefemale approached, gave the contents of the nest a hasty survey, and immediatelyflew off. She returned in a short time in company with her mate, and bothflew to the nest apparently in the greatest rage, took each an egg in theirclaws, and dashed it against the ground at the distance of more than arod from the nest, the female repeating the same to the other egg. Thisdone, they continued for some time to vent their rage on the broken eggs,tossing them about, and at the same time manifesting their displeasurein every possible way. They afterwards forsook the nest. The eggs measurean inch and an eighth in length, six and a half eighths in breadth. Theynever raise more than one brood in a season here."