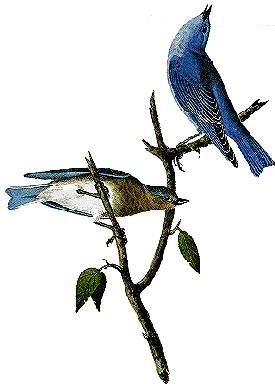 This beautiful species, first introduced to the notice of ornithologistsby Dr. RICHARDSON, who procured a single specimen at Fort Franklin in July1825, is merely a summer visitor to the Fur Countries. Both the male andthe female are represented in my plate. The latter I believe has not hithertobeen figured. Mr. NUTTALL’S notice respecting this interesting bird, soclosely allied to Sialia Wilsoni, is as follows:

"Sialia arctica. Ultramarine Blue-bird. About fifty or sixty milesnorth-west of the usual crossing place of that branch of the Platte calledLarimie’s Fork, in the early part of June, this species of Sialia is notuncommon. The female utters a low plaint when her nest is approached, theplace for which is indifferently chosen in a hole in a clay cliff, or inthat of the trunk of a decayed cedar. At this time the young were hatched.The nest is made of the usual material of dry grass in very insignificantquantity. They are more shy than the common species, and have the samemode of feeding by watching on some low bush or plant, and descending foran insect. We afterwards saw a nest of this species on a cliff of the Sandyriver, a branch of the Colorado of the West. The female and male were bothfeeding their brood. The former chirped and appeared uneasy at my approach,and at intervals uttered a plaintive yeow. The male sings more quaintlyand monotonously than the common kind, but in the same general tone andmanner."

To this Mr. TOWNSEND adds that it is found in the "Forests on thebanks of the Platte river, in the vicinity of the Black Hills, and in thesame situations on the banks of the Columbia. This species," he continues,"was observed in the winter at Fort Vancouver, associating with S.occidentalis. They confine themselves chiefly to the fences in the neighbourhoodof the Fort, occasionally flying to the ground, and scratching in the earthfor minute insects, the fragments of which were found in their stomachs.After procuring an insect, the male usually returned to the fence, andwarbled for a minute most delightfully. Its note, although like that ofour common Sialia, is still so different as to be easily recognised. Itis equally sweet and clear, but of so little power (at least at this season)as to be heard only at a short distance. In the spring it is louder andbolder, but is at all times much less strong than that of the common species."

Bill of ordinary length, nearly straight, broader than high at the base,compressed towards the end; upper mandible with the dorsal line straightand declinate, until near the end, when it becomes convex, the ridge narrow,the sides convex towards the end, the edges direct and overlapping, witha distinct notch close to the narrow deflected tip; lower mandible withthe angle of moderate length and narrow, the dorsal line straight, thesides convex, the edges direct, the tip narrow. Nostrils basal, oval.

Plumage soft and blended, with considerable gloss; short bristles atthe base of the upper mandible. Wings very long; the first quill very small,being only seven-twelfths of an inch long, the second one-twelfth shorterthan the third, which is longest, but exceeds the fourth only by half atwelfth, the other primaries rapidly graduated; the outer secondaries emarginate,the inner not elongated. Tail long, deeply emarginate, of twelve strongfeathers, of which the medial are five-twelfths shorter than the lateral.

Bill and feet black; iris brown. The general colour of the upper partsis light azure blue, approaching to smalt blue; the quills and larger covertsdark greyish-brown, the outer tinged with blue, the primaries broadly marginedwith light blue, the secondaries with greyish-blue, the inner chiefly withdull white. The tail-feathers are also brown, gradually more blue towardthe base, and all broadly margined externally with that colour. The sidesof the head, the fore part and sides of the neck, and the anterior halfof the breast, light greenish-blue; that colour gradually fading on thehind part of the breast; the abdomen and lower tail-coverts greyish-white.

The female differs greatly. The parts which retain the same colour arethe rump, wings, and tail, of which, however, the blue edgings are lesspure and of less extent, and the outer primary and outer tail-feathersare margined externally with white. The upper part of the head, the hindneck, the back, scapulars, and wing-coverts are light greyish-brown, marginedwith pale greenish-blue; the cheeks and sides of the neck are paler; thefore part of the neck and the anterior portion of the breast are lightgreyish-brown, on the breast tinged with red; the rest of the lower partsof an undecided brownish-white tint; the lower wing-coverts pale greyish-brown,edged with white, the lower tail-coverts with a medial dusky streak.

The above descriptions are taken from skins procured by Mr. TOWNSENDon the Columbia river. That of the male is from a specimen shot in June1835; and that of the female from one shot on the 26th of the same monthand year. Of two other specimens in my possession, a male agrees with thatdescribed, but has the blue of the upper parts deeper, and of a tint approachingto that of the common species. The female is also similar to that described,but has a dull white spot before, the eye, and the upper part of the throatbrownish-white.

The Mountain Bluebird is also the Nevada State Bird