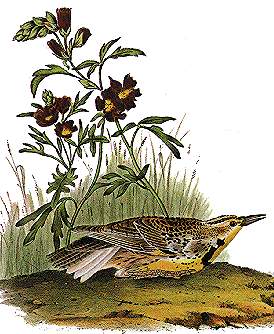 Although the existence of this species was known to the celebrated explorers of the west, LEWIS and CLARK, during their memorable journey across the Rocky Mountains and to the Pacific; no one has since taken the least notice of it.

These travellers mention it at page 236 of the first volume, edited by PAUL ALLEN, Esq., and revised by ARCHIBALD M'VICAR. They say, on the 21st June, 1805, "There is also a species of Lark, much resembling the bird called the Old Field Lark, with a yellow breast and a black spot on the croup. * * * * The beak, too, is somewhat larger and more curved, and the notes differ considerably." The expedition was, at the period mentioned, in the neighbourhood of the great Falls of the Missouri.

We found this species quite abundant on our voyage up the Missouri, above Fort Croghan, and its curious notes were first noticed by Mr. J. G. BELL, without which in all probability it would have been mistaken for our common species (Sturnella Ludoviciana). When I first saw them, they were among a number of Yellow-headed Troupials, and their notes so much resembled the cries of these birds, that I took them for the notes of the Troupial, and paid no farther attention to them, until I found some of them by themselves, when I was struck with the difference actually existing between the two nearly allied species.

In their fight, manners on the ground, and general habits, nothing different from S. Ludoviciana could be observed; but on comparing the Missouri Meadow Lark with specimens of S. Ludoviciana, procured near New York, the differences are quite sufficient to warrant me to describe the former as a new and hitherto undescribed species. The bill of the Missouri Meadow Lark is more curved, and considerably narrower, than in the common species, indeed it in scarcely more than one half the breadth of the bill of the latter. The Missouri Lark is also considerably smaller, but the greatest difference is in the form of the tail, which in this species is nearly square, and consequently has the feathers nearly equal, whilst in the common one, the tail is rounded, and the two lateral feathers are nearly three quarters of an inch shorter than the middle ones; besides which, the central tail-feathers of the present bird are narrowly barred, and not scalloped on their margins as in Sturnella Ludoviciana. The nest in not covered over, and the eggs are considerably smaller, and differently marked. This species is very shy, but abundant on all the prairies; its flesh resembles that of the common bird, and is indifferent eating.

The eggs, which are usually four or five in number, measure 1 1/8 inches in length, by 3/4 in breadth, pure white ground. The spots are more bold, larger, and of a brighter reddish colour than those of S. Ludoviciana, and are diffused over the whole surface, instead of being crowded toward the larger end, as is the case in the common species. The irides are brownish, and the hairs on the upper eye-lid longer and more numerous. The general colours and markings are much the same in both species, but much paler in the present one.