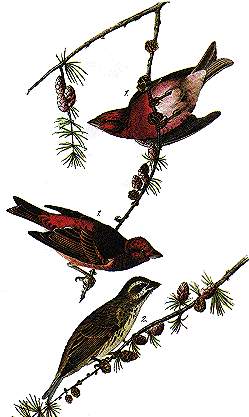 From the beginning of November until April, flocks of the Purple Finch,consisting of from six to twenty individuals, are seen throughout the wholeof Louisiana and the adjoining States. They fly compactly, with an undulatingmotion, similar to that of the Common Greenfinch of Europe. They alightall at once, and after a moment of rest, and as if frightened, all taketo wing again, make a circuit of no great extent, and return to the treefrom which they had thus started, or settle upon one near it. Immediatelyafter this, every individual is seen making its way toward the extremitiesof the branches, husking the buds with great tact, and eating their internalportion. In doing this, they hang like so many Titmice, or stretch outtheir necks to reach the buds below. Although they are quite friendly amongthemselves during their flight, or while sitting without looking afterfood, yet, when they are feeding, the moment one goes near another, itis strenuously warned to keep off by certain unequivocal marks of displeasure,such as the erection of the feathers of the head and the opening of themouth. Should this intimation be disregarded, the stronger or more daring,of the two drives off the other to a different part of the tree. They feedin this manner principally in the morning, and afterwards retire to theinterior of the woods. Towards sunset they reappear, fly about the skirtsof the fields and along the woods, until, having made choice of a tree,they alight, and, as soon as each bird has chosen a situation, stand still,look about them, plume themselves, and make short sallies after flies andother insects, but without interfering with each other. They frequentlyutter a single rather mellow clink, and are seen occupied in this manneruntil near sunset, when they again fly off to the interior of the forest.I one night surprised a party of them roosting in a small holly tree, asI happened to be brushing by it. In their consternation they suddenly startedall together, and in the same direction, when, not knowing what birds theywere, I shot at them and brought down two.

It is remarkable that, at this season, males in full beauty of plumageare as numerous as during the summer months in far more northern parts,where they breed; and you may see different gradations of plumage, fromthe dingy greenish-brown of the female and young to the richest tints ofthe oldest and handsomest male; while along with these there are otherswhich, by my habit of examining birds, I knew to be old, and which areof a yellowish-green, neither the colour of the young males, nor that ofthe females, but a mixture of all.

The song of the Purple Finch is sweet and continued, and I have enjoyedit much during the spring and summer months, in the mountainous parts ofPennsylvania, where it occasionally breeds, particularly about the GreatPine Forest, where, although I did not find any nests, I saw pairs of thesebirds flying about and feeding their young, which could not have been manydays out, and were not fully fledged. The food which they carried to theiryoung consisted of insects, small berries, and the juicy part of the conesof the spruce pine.

They frequently associate with the Common Cross-bills, feeding on thesame trees, and like them are at times fond of alighting against the mudused for closing the log-houses. They are seldom seen on the ground, althoughtheir motions there are by no means embarrassed. They are considered asdestructive birds by some farmers, who accuse them of committing greatdepredations on the blossoms of their fruit-trees. I never observed thisin Louisiana, where they remain long after the peach and pear trees arein full bloom. I have eaten many of them, and consider their flesh equalto that of any other small bird, excepting the Rice Bunting.

This species was seen by Dr. RICHARDSON on the banks of the Saskatchewanriver only, where it feeds on willow-buds. It arrives there in May, andresides during the summer. The eggs have been procured in the State ofMassachusetts by my friend Dr. T. M. BREWER. They measure seven-eighthsand a quarter in length, four-eighths and a half in breadth, and are thusof an elongated form, rather pointed. Their ground-colour is a bright emerald-green,sparingly marked with dots and a few streaks of black, accumulated nearthe apex, and some large marks of dull purple here and there over the wholesurface. The following, note is from the same gentleman:–"The passageof the Purple Finch through this State on its way north, is so rapid, andthe number of those that stop to breed here so small, that I can furnishnothing respecting its habits, except that there is good reason to believethe accusation which has been brought against it, of injuring the blossomsof fruit trees. Last year, the trees were in full bloom at the time thisbird was migrating, and I saw them plainly clinging to the branches, andat work upon the blossoms; so that under some trees the ground was literallystrewed with the result of their destructiveness, although they did notappear to feed on the blossoms. I have had the good fortune to meet withits nest and eggs this season. Mr. CABOT found another, and is probablythe first naturalist who has done so. The nest which I found was builtin a cedar tree, at the distance of five feet from the ground. The treestood by itself in a small sandy pasture, which was sparingly covered withhalf-grown cedars. The nest itself was rudely constructed: it was composedexternally of coarse grass and weeds, lined with fine roots of the same,and little care seemed to have been bestowed on its completion. The diameterof the exterior was 9 inches, the brim 3 inches, the depth 1 inch, theexternal depth 2 inches, giving it thus a shallow or flattish appearance.The eggs, four in number, were of a bright emerald-green."

I have found this species from Labrador to the Texas. Mr. NUTTALL andMr. TOWNSEND met with it on the Columbia river, and all the way to St.Louis. In South Carolina, where it appears only during severe winters,it feeds on the berries of the Virginian juniper, commonly called the redcedar; and when the berries fall to the ground, it alights to secure them.Dr. BACHMAN has kept it in aviaries, where it became very fat, silent,and only uttered its usual simple feeble note. After moulting, the malesassumed the plumage of the females. The next spring a very slight appearanceof red was seen, but they never recovered their original brilliancy, andit was difficult to distinguish the sexes. It breeds sparingly in the northernparts of the State of New York. In June 1837, I met with three pairs, withina few miles of Waterford, that evidently had nests in the neighbourhood.

Palate gently ascending; upper mandible considerably concave, with threeprominent lines, of which the two lateral are much larger; mandibles nearlyequal in breadth, the lower deeply concave. Width of mouth 5 twelfths.Tongue 5 twelfths long, sagittate and papillate at the base, much compressed,being higher than broad, channelled above, the channel becoming somewhatdilated toward the end, and approaching to that of the Pine Grosbeak andthe Crossbills. OEsophagus 2 inches 2 twelfths in length, its greatestwidth 4 twelfths. Stomach 5 1/2 twelfths long, 4 1/2 twelfths broad; itslateral muscles of moderate size, the epithelium tough and longitudinallyrugous. Contents of stomach, seeds of various sorts. Intestine 8 3/4 incheslong, its width from 1 1/2 twelfths to 3/4 twelfth; coeca 1/2 twelfth long,1/4 twelfth broad 9 twelfths distant from the extremity.

During winter, from Texas to the Carolinas, and northward to Kentucky.In summer, from St. Louis to the Columbia, and in the Fur Countries. Abundant.

Bill Shortish, robust, bulging, conical, acute; upper mandible withits dorsal outline a little convex, under mandible with its outline alsoslightly convex, both broadly convex transversely, the edges straight tonear the base, where they are a little deflected. Nostrils basal, roundish,open, partially concealed by the feathers. Head rather large. Neck shortand thick. Body full. Legs of moderate size; tarsus of the same lengthas the middle toe, covered anteriorly with a longitudinal plate above anda few transverse scutella below, posteriorly with an acutely angular longitudinalplate; toes scutellate above, free, the lateral ones nearly equal; clawsslender, arched, compressed, acute, that of the hind toe not much larger.

Bill deep brown above, paler and tined with blue beneath. Iris blackish-brown.Feet and claws brown. Head, neck, breast, back, and upper tail-covertsof a rich deep lake, approaching to crimson on the head and neck, and fadinginto rose-colour on the belly. Fore part of the back streaked with brown.Quills and larger coverts deep brown, margined externally and tipped withred. Tail feathers deep brown, similarly margined. A narrow band of cream-colouracross the forehead, margining the base of the upper mandible.

The young bird so closely resembles the adult female, that the samedescription will answer for both. The general colour of the upper partsis brownish-olive, streaked with dark brown. There is a broadish whiteline over the eye, and another from the commissure of the gap backwards.The under parts are greyish-white, the sides streaked with brown. The quillsand tail-feathers are dark brown, margined with olive.