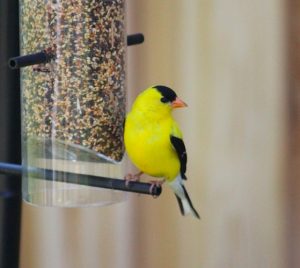 The Eastern Goldfinch (Carduelis tristis) now known as the American Goldfinch or Wild Canary is the official state bird of New Jersey.

It was adopted officially on June 27, 1935 by New Jersey legislature. They eat seeds from flowers like dandelions, ragweed and sunflowers.

The Eastern Goldfinch is also the state bird of Iowa.

This species merely passes over the State of Louisiana in the beginning of January, and at that season is seen there for only a few days, alighting on the highest tops of trees near water-courses, in small groups of eight or ten, males and females together. They feed at that period on the opening buds of maples, and others that are equally tender and juicy. In the month of November they are again seen moving southwards, and for a few days only.

A few breed in Kentucky and the State of Ohio, but the Middle Districts are their principal places of resort during summer, although they extend their migrations to a high latitude. They arrive in the State of New York about the middle of April; and as they become very abundant in that State during the summer, I shall describe their habits as observed there.

The flight of the American Goldfinch is exactly similar to that of the European bird of the same name, being performed in deep curved lines, alternately rising and falling, after each propelling motion of the wings. It scarcely ever describes one of these curves without uttering two or three notes whilst ascending, such as its European relative uses on similar occasions.In this manner, its flight is prolonged to considerable distances, and it frequently moves in a circling direction before alighting. Their migration is performed during the day. They seldom alight on the ground, unless toprocure water, in which they wash with great liveliness and pleasure, afterwhich they pick up some particles of gravel or sand. So fond of each other’s company are they, that a party of them passing on the wing will alter its course at the calling of a single one perched on a tree. This call is uttered with much emphasis: the bird prolongs its usual note, without much alteration, and as the party approaches, erects its body, and moves it to the right and left, as if turning on a pivot, apparently pleased at shewing the beauty of its plumage and the elegance of its manners. No sooner has the flock, previously on wing, alighted, than the whole party plume themselves, and then perform a little sweet concert. So much does the song of our Goldfinch resemble that of the European species, that whilst in France and England, I have frequently thought, and with pleasure thought, that they were the notes of our own bird which I heard. In America again, the song of the Goldfinch recalled to my remembrance its transatlantic kinsman, and brought with it too a grateful feeling for the many acts of hospitality and kindness which I have experienced in the “old country.”

The nest also is perfectly similar to that of the European bird, being externally composed of various lichens fastened together by saliva, and lined with the softest substances. It is small and extremely handsome, and is generally fixed on a branch of the Lombardy poplar, being sometimes secured to one side of a twig only. I have also found it in elder bushes,a few feet above the ground, as well as in other trees. The female depositsfrom four to six eggs, which are white, tinged with bluish, and marked at the larger end with reddish-brown spots. They raise only one brood ina season. The young follow the parents for a long time, are fed from the mouth, as Canaries are, and are gradually taught to manage this themselves.When it happens that the female is disturbed while on her nest, she glides off to a neighbouring tree, and calls for her mate, pivoting herself on her feet, as above described. The male approaches, passes and repasses on the wing at a respectful distance from the intruder, in deeper curves than usual, uttering its ordinary note, and when the unwelcome visit anth as departed, flies with joy to his nest, accompanied by the female, who presently resumes her occupation.

The food of the American Goldfinch consists chiefly of seeds of thehemp, the sun-flower, the lettuce, and various species of thistle. Nowand then, during winter, it eats the fruit of the elder.

In ascending along the shores of the Mohawk river, in the month of August, I have met more of these pretty birds in the course of a day’s walk than anywhere else; and whenever a thistle was to be seen along either bank of the New York canal, it was ornamented with one or more Goldfinches.They tear up the down and withered petals of the ripening flowers with ease, leaning downwards upon them, eat off the seed, and allow the down to float in the air. The remarkable plumage of the male, as well as its song, are at this season very agreeable; and so familiar are these birds ,that they suffer you to approach within a few yards, before they leave the plant on which they are seated. For a considerable space along the Genessee river, the shores of Lake Erie, Lake Ontario, and even Lake Superior, I have always seen many of them in the latter part of summer. They havethen a decided preference for the vicinity of water.

It is an extremely hardy bird, and often remains the whole winter inthe Middle Districts, although never in great numbers. When deprived of liberty, it will live to a great age in a room or cage. I have known two instances in which a bird of this species had been confined for upwards of ten years. They were procured in the market of New York when in matureplumage, and had been caught in trap-cages. One of them having under gon ethe severe training, more frequently inflicted in Europe than America, and known in France by the name of galerien, would draw water for its drink from a glass, it having a little chain attached to a narrow belt of soft leather fastened round its body, and another equally light chain fastened to a little bucket, kept by its weight in the water, until the little fellow raised it up with its bill, placed a foot upon it, and pulled again at the chain until it reached the desired fluid and drank, when, on letting go, the bucket immediately fell into the glass below. In the same manner, it was obliged to draw towards its bill a little chariot filled with seeds; and in this distressing occupation was doomed to toil through a life of solitary grief, separated from its companions, wantoning on the wildflowers, and procuring their food in the manner in which nature had taught them.After being caught in trap-cages, they feed as if quite contented; but if it has been in spring that they have lost their liberty, and they have thus been deprived of the pleasures anticipated from the previous connexion of a mate, they linger for a few days and die. It is more difficult to procure a mule brood between our species and the Canary, than between the latter and the European Goldfinch, although I have known many instances in which the attempt was made with complete success.

The young males do not appear in full plumage until the following spring.The old ones lose their beauty in winter, and assume the duller tints ofthe female. In fact, at that season, young and old of both sexes resemble each other.

There is a trait of sagacity in this bird which is quite remarkable, and worthy of the notice of such naturalists as are fond of contrasting instinct with reason. When a Goldfinch alights on a twig imbued with bird-lime expressly for the purpose of securing it, it no sooner discovers the nature of the treacherous substance, than it throws itself backwards, with closed wings, and hangs in this position until the bird-lime has run out in the form of a slender thread considerably below the twig, when feeling a certain degree of security, it beats its wings and flies off, with a resolution, doubtless, never to alight in such a place again; as I have observed Goldfinches that had escaped from me in this manner, when about to alight on any twig, whether smeared with bird-lime or not, flutter over it, as if to assure themselves of its being safe for them to perch upon it.

This interesting species is found on the shores of the Columbia river.It is mentioned by Dr. RICHARDSON as visiting the Fur Countries, where it arrives at a very late period, as it retires in September, after a stay of less than three months. The eggs described by that most zealous naturalist agree in every particular with some now before me, which I collected myself.They measure a trifle more than five and a half eighths in length, by four and a half eighths in breadth, and are very obtuse at one end and sharp at the other. My friend Dr. BACHMAN informs me, that “although thisbird is not uncommon in the maritime districts of South Carolina duringwinter, it has not been observed to breed nearer than one hundred milesfrom Charleston.” Dr. T. M. BREWER states, that “it remains throughthe year at Boston, breeds in large numbers, and is seen during winterin great flocks, in dull plumage, constantly flitting about.”

Abundant in the Middle and Western Districts during summer. Accidentalin the Southern States during winter. Columbia river and Fur Countries.Abundant. Migratory.

Bill rather slender, second and third quills longest. Male rich lemon-yellow, fading behind into yellowish-white; upper part of head, wings, and tail black; smaller coverts yellow, quills margined, and secondary coverts tipped with yellowish-white; inner webs of tail-feathers in their terminal half white. Female brownish-olive above, without black on the head; fore neckand breast greyish-yellow, the rest of the lower parts greyish-white. Younglike the female, as is the male in winter.