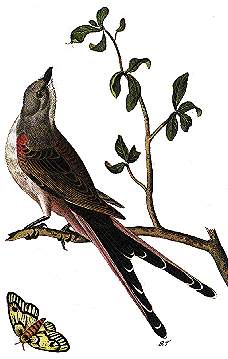 Not having seen this handsome bird alive, I am unable to give you anyaccount of its habits from my own observation; but I have pleasure in supplyingthe deficiency by extracting the following notice from the "Manualof the Ornithology of the United States and of Canada," by my excellentfriend THOMAS NUTTALL.

"This very beautiful and singular species of Flycatcher is confinedwholly to the open plains and scanty forests of the remote south-westernregions beyond the Mississippi, where they, in all probability, extendtheir residence to the high plains of Mexico. I found these birds rathercommon near the banks of Red river, about the confluence of the Kiamesha.I again saw them more abundant near the Great Salt river of the Arkansas,in the month of August, when the young and old appeared, like our King-birds,assembling together previously to their departure for the south. They alightedrepeatedly on the tall plants of the prairie, and were probably preyingupon the grasshoppers, which were now abundant. At this time also, theywere wholly silent, and flitted before our path with suspicion and timidity.A week or two after, we saw them no more, they having retired probablyto tropical winter-quarters.

In the month of May, a pair, which I daily saw for three or four weeks,had made a nest on the horizontal branch of an elm, probably twelve ormore feet from the ground. I did not examine it very near, but it appearedexternally composed of coarse dry grass. The female, when first seen, wasengaged in sitting, and her mate wildly attacked every bird which approachedtheir residence. The harsh chirping note of the male, kept up at intervals,as remarked by Mr. SAY, almost resembled the barking of the prairie marmot,’tsh, ‘tsh, ‘tsh. His flowing kite-like tail, spread or contracted at willwhile flying, is a singular trait in his plumage, and rendered him conspicuouslybeautiful to the most careless observer."

Tail longer than the body; upper part of the head, cheeks, and hindneck ash-grey; back brownish-grey, rump dusky; anterior wing-coverts scarlet,quills brownish-black, tail-feathers deep black, the three outer on eachside rose-coloured to near the end; lower parts white before, rose-colouredbehind.