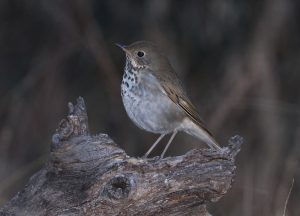 This, kind reader, is another constant resident in the Southern States,more especially those of Mississippi and Louisiana, where it abounds duringthe winter months, and is found in considerable numbers during spring andsummer. In the lower parts of Kentucky, Indiana and Tennessee, it is alsoobserved during spring and summer; but it becomes scarcer as you advancetowards the Middle Districts, where a few are occasionally seen about thelow woodlands of the Atlantic shores.

Except during winter, this Thrush prefers the darkest, most swampy, and most secluded cane-brakes along the margins of the Mississippi, where it breeds and spends the summer, retiring to higher lands during the period when the alluvial grounds are covered with the water which, during freshets, generally inundates these low cane-brakes and swampy retreats.

The flight of the Hermit Thrush is performed low over the ground, andin a gliding manner, as the bird shifts from one place to another at ashort distance. In this respect, it differs greatly from its relative,my great favourite, the Wood Thrush, the flight of which is more protracted,and is performed at a greater elevation.

This Thrush is most frequently seen on the ground, where it hops withthe same movements employed by the well-known little Red-breast of Europe,in other words, before it hops its breast almost comes in contact withthe ground, the tail is a little raised, the wings droop, and after hopping,it runs a few steps, erects its head, and looks around.

All the nests of the Hermit Thrush which I have found were in everyinstance placed lower on the branches of trees than those of the Wood Thrush,seldom above seven or eight feet from the ground, and sometimes so lowthat I could easily look into them. These nests were fixed to a horizontalbough, but were not saddled upon it so deeply, as those of the Wood Thrushare. They were smaller, and had no mud or plaster of any kind, but wereextremely compact, the outer parts being formed of coarse dry weeds, andhere and there a withered leaf, the interior composed of a long delicatekind of grass, which is found growing along the edges of cane-brakes. Thisgrass is arranged in a circular manner, to the whole extent of its length,and waives the inner part of the nest of this bird a remarkable appearanceof neatness and finish. The female lays from four to six eggs, of a lightblue colour, sprinkled with dark dots towards the large end. The firstset are laid early in April, the second about the middle of June; for,in Lower Louisiana, this species rears two broods in the year. The femaleis much attached to her nest, and glides off silently from it when closelyapproached, not, however, unless she thinks herself or her nest observed.The young run after the parents, on the ground, for several days afterthey leave the nest.

As soon as the waters of the Mississippi become so swelled as to overflowthe banks, the Hermit Thrush retires to the nearest hills, and mixes withmany other birds, amongst which the Wood Thrush is preeminent. The formeris, however, easily recognised at once, by its single plaintive note, heardfrom the boughs of low trees, on the berries of which it feeds. In fact,its food is altogether composed of different fruits and berries which areat all seasons abundant in our woods.

In the Middle Districts the Hermit Thrush is only observed during afew weeks in the spring and again in autumn. It arrives in the States ofNew Jersey and New York between the end of April and the middle of May,generally in a desultory manner, and, throwing itself into the depths ofthe forests, there spends the summer months, frequenting the lowest andmost shady thickets. Its song is sometimes agreeable.

Plumage rather loose. A few longish bristles at the base of the uppermandible. Wings of ordinary length, the third quill longest, the firstvery short. Tail rather short, even, of twelve broad feathers, the shaftsof which project a little beyond the extremity of the webs, as is the casewith the outer primaries.

The female differs only in having the spots on the breast somewhat larger,and the tints of the upper parts rather deeper.