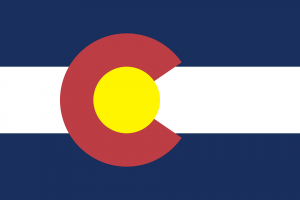 The Colorado State flag was adopted in 1911 by the General Assembly. It consists of three alternate stripes of equal width and at right angles to the staff, the two outer stripes to be blue of the same color as in the blue field of the US flag and the middle stripe to be white, the proportion being a width of two-thirds of its length.

“The Colorado state flag at a distance from the staff end is one fifth of the total length of the flag. There is a circular red ‘C’, of the same color as the red in the United States flag too.”

The exact colors were not established until 1911.