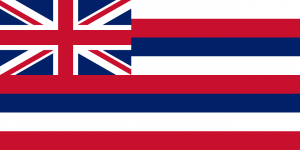 The official Hawaiian state flag was adopted in 1845, long before Hawaii became a state of the US.  Hawaii was once an independent kingdom (1810 – 1893).
The Hawaiian flag was designed at the request of King Kamehameha I. The flag has eight stripes of white, red and blue that represent the eight main islands. The flag of Great Britain is emblazoned in the upper left corner to honor Hawaii’s friendship with the British. Hawaii was once placed under British protection.
Hawaii’s flag is the only United States flag to contain a flag from a foreign country.

Symbols on the Hawaiian Flag