The Idaho state flag was officially adopted in 1907 but the design goes back a very long while. It was originally a battle flag used in the Philippines in 1899 during the Spanish American War.

The official Idaho flag has a simple design. The flag is blue with the state symbol in the center and the words “State of Idaho” beneath the seal. The state seal (at the time it was a territory seal) was created in 1890 by Emma Edwards Green, the only woman to design a state seal.

In the state seal the woman represents liberty, justice, and equality. The man is a miner. The pictures on the shield represent the main industries of forestry, farming and mining highlighting the state’s natural beauty. The cornucopias, or horn of plenty are symbols of abundance. The elks head represents wildlife. “Esto perpetua” (Let it be perpetual) is Idaho’s state motto. 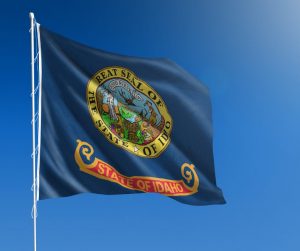