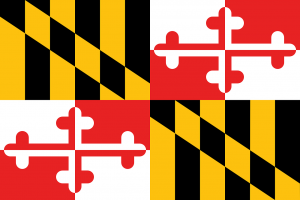 The Maryland flag contains the family crest of the Calvert and Crossland families. Maryland was founded as an English colony in 1634 by Cecil Calvert, the second Lord Baltimore.

The black and Gold designs belong to the Calvert family. The red and white design belongs to the Crossland family. The Maryland state flag was officially adopted in 1904 and is symbolic of the “reunion of all the citizens in the state and represented through the colors of the flag.”