The flag is royal blue, with a gold fringe and is jam-packed with Minnesota state symbols. In the center of the flag is the state seal. Around the state seal is a wreath of the state flower, the lady slipper.

Three dates are woven into the wreath: 1858, the year Minnesota became a state; 1819, the year Fort Snelling was established; and 1893, the year the official flag was adopted. Nineteen stars ring the wreath.  symbolizing the fact that Minnesota was the 19th state to enter the Union after the original 13. The largest star represents the North star and  Minnesota.

“L’étoile du Nord” translates to “the star of the North” which is Minnesota’s official motto.

Symbolism within the Seal on the Flag 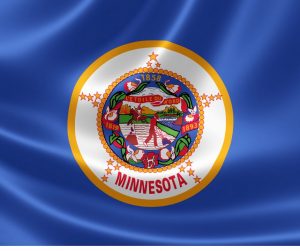 •Horse, spear, axe, rifle, and plow – represent important tools that were used for hunting and labor

•The cultivated ground and plow – the importance of agriculture