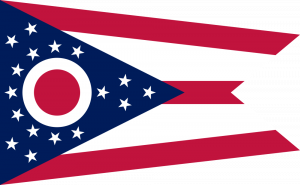 The flag of Ohio, which was officially adopted in 1902, is the only flag that doesn’t have the traditional rectangular shape. The Ohio flag is actually a burgee. A burgee is typically flown by yachts, has a distinguished shape, more like a pennant with two tails. That design is properly called swallow-tailed.

Ohio’s flag was designed by John Eisenmann in 1901. Ohio was without a state flag for nearly 100 years before it was officially adopted.

The design of the Ohio flag has three red and two white horizontal stripes. At its staff end is a blue triangular field with the center of the middle red stripe. There are 17 white stars grouped around a red disc with a white circle around it.

The 13 stars are depicted for the original 13 colonies and 4 more were added because Ohio was the 17th state admitted to the Union. The ‘O’ represents O for Ohio and also but also suggests Ohio’s famous state nickname, “The Buckeye State.” The triangles represent the hills and valleys and the stripes, roads and waterways.