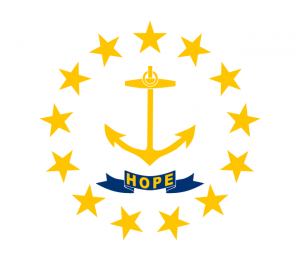 Officially Adopted:  November 1, 1897
Placed on a white field the Rhode Island flag features a circle of thirteen gold stars representing the first thirteen states. The stars surround a gold ship’s anchor. The state’s motto ” Hope” is on a blue ribbon below the anchor.
The state flag of Rhode Island is sometimes shown with gold fringe around the perimeter of the flag but it is not a part of the official flag unless it is used in federal level displays.