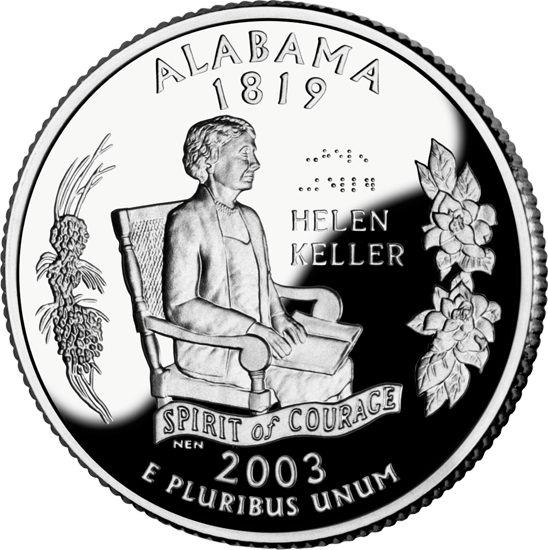 FULL DESCRIPTION: The theme of the quarter is Spirit of Courage. It highlights an image of Helen Keller seated in a chair holding a book. An Alabama long leaf pine branch and a garland of magnolias grace the sides of the design. A banner underneath Helen Keller says "Spirit of Courage" and the coin is inscribed: "Alabama 1819" (top); "Helen Keller" in both standard print and Braille (middle, right); 2003 (bottom), and E Pluribus Unum (bottom). This quarter is the first U.S. circulating coin to feature braille.

HISTORY/CONTEXT: Helen Keller was born at "Ivy Green" in Tuscumbia, Alabama, on June 27, 1880. When she was a small child, an illness (likely scarlet fever or meningitis) struck her deafblind (destroying her sight and hearing) depriving her of the senses by which we normally learn to speak. Despite her disabilities, Helen Keller learned to speak and read using the raised and manual alphabets, as well as Braille. Keller also graduated with honors from Radcliffe College, receiving her Bachelor of Arts degree. She went on to publish numerous books, articles and essays. Helen Keller lived out her life addressing social issues for disabled persons and women. Every year at "Ivy Green," a weeklong celebration is held to commemorate her lifetime of accomplishments and her "Spirit of Courage."

In January 2001, Alabama Governor, Don Siegelman, announced a statewide competition for Alabama schools to submit concepts for the Alabama quarter. Of the thousands of concepts submitted, the Governor forwarded three to the U.S. Mint: Helen Keller, Alabama's role in social movements, and Alabama's social and economic history. The Mint returned five candidate designs to the Governor's office where the final selection of Helen Keller, "Spirit of Courage," was made.