Fruit: Moderate sized woody cone (about 3 inches long) with a short stalk; imbricate scales are thickened and tipped with a long bristle, giving rise to its common name. Seeds are winged.

Twig: Orange-brown when young but darkening with age.

Bark: Young bark is thin, smooth, and gray-white later becoming furrowed and reddish-brown. Old trees on harsh, windy sites may have only a few strands of bark remaining in crevices where it is protected from sandblasting winds. 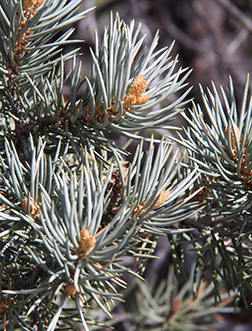